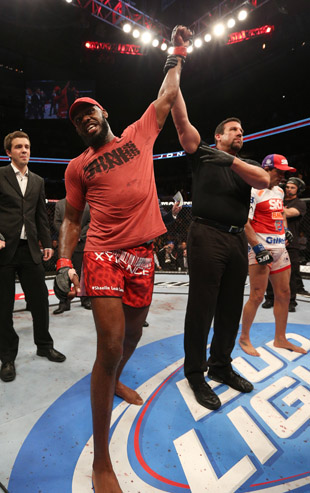 After waiting way too long for fights, UFC 152 delivered with mostly exciting bouts. There's no need to discuss Matt Hamill's bout with Roger Hollett. Instead, let's talk about the fighters who truly stood out on Saturday night in Toronto. Here are Cagewriter's three stars. Tell us yours in the comments, on Facebook or Twitter.

No. 1 star -- Jon Jones: The light heavyweight champion has barely faced adversity in fights, but Vitor Belfort gave it to him with an early armbar attempt. Jones got out of the submission, and then beat up Belfort for four rounds until an Americana submission ended the fight in the fourth round.

No. 2 star -- Cub Swanson: His knockout of Charles Oliveira was one of the weirder knockouts in recent memory. Oliveira was hurt by a body shot. Swanson then hit Oliveira with a left in the head, and Oliveira stood there for a second before falling to the ground. Slow motion knockouts are just as effective, and Swanson is now 3-0 in 2012. Every win was by knockout.

No. 3 star -- Vinny Magalhaes: It's been three years since Magalhaes was in the UFC. He reminded fans of his grappling prowess with a perfectly executed armbar of Igor Pokrajac. It was the exact move you would expect out of a jiu-jitsu world champ.